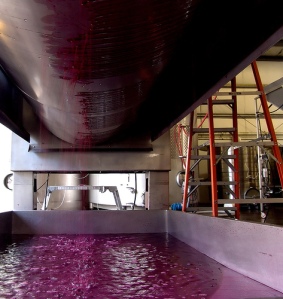 As you’ve probably heard, crush in Napa Valley was early this year. And for most producers, it’s been over for at least a week or two. Exhale…
But, for red wine, the work isn’t over quite yet. There’s still a little pressing to do. the winemakers are greedily getting the last bit of color and flavor out of the grape skins for their reds before sending them off to the barrel cellar.
Over the years, I’ve noticed that there’s quite a lot of confusion about the difference between crushing and pressing, so let’s get it straightened out. Here goes…

This machine is first stop for most reds when they come in from the vineyard. It removes the stems and breaks the grape skins open. When you’re finished crushing, you’ve still got the skins and seeds,which go right into the fermentation tank with the juice. As you know, all of the color and most of the flavor in red wine comes from the skins.

The press leaves the winemaker with only liquid, however cloudy.

Think of the press as a giant strainer. Picture yourself dropping broken grapes into this strainer. Of course,some of  the juice runs off. Then, you push down with your fist to squeeze more liquid out of the skins. That’s pressing. There are a few different styles of presses a winemaker can use, but I won’t bore you with that unless you ask. In terms of chronology, here’s how it goes:

Red wine: The grapes are usually stemmed and crushed right away – ideally within hours of harvest. Again, since the grape juice doesn’t have any color the broken grapes – skins, seeds and all – go right into the fermentation tank and are fermented together.

The red wine still hasn’t been pressed, right? Quite often the winemaker will extend the skin-contact time beyond fermentation. This is usually determined by tasting. While fermentation may only take a week or so for reds, the juice or wine to skin contact may be upwards of a month. It’s a question of logistics and style.

Finally, the wine will be drained away, perhaps into barrels. Of course, there’s a big pile of skins and seeds left in the tank. Some lucky guy – most likely the new guy – gets to crawl into the tank and shovel out the skins. These skins contain quite a lot of perfectly usable wine, so they’re sent to be pressed. Press wine is heavy duty stuff compared to the drained wine (which is called free run – another wine word). So, often it’s kept separate and may be blended back into the free run later.

White wine: The grapes may or may not be crushed – some winemakers believe the wine will be less astringent if they send whole clusters directly to the press. It will also be easier to clarify it. In nearly all cases the grapes are pressed the same day as harvest. So, for whites, most often, only the juice is fermented.

Review -in a nutshell:

What: Removes the stems and breaks the grape skins open.
When: Right after harvest, if possible, or at least it’s the first stop after sorting. Whites may or may not be crushed.

What: removes all of the gross solids, leaving just the juice.
When: For whites, right away after harvest and sorting. For reds, after the fermentation is done.
Send me your wine question
To subscribe by email go to the top of the page.