Grape of the Week: Zinfandel 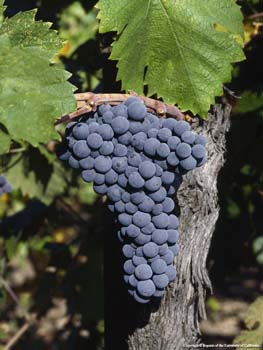 With the ZAP (Zinfandel Advocates and Producers) Festival only about a week away, let’s talk Zin!

For a long time we called Zinfandel “The California grape.” In fact, I still see references to Zin as a uniquely American or Californian wine. That, in spite of the fact that it doesn’t look like, taste like or have the growing habits of native-American varieties. Everything about it screams vinifera (vines of European origin) but no one could find its European counterpart. And, foolishly, because it didn’t appear to have the European pedigree, added on to the fact that its generosity of yield made it a staple for “jug reds”, it didn’t get much respect until recently.

Does it deserve respect? You betcha! If it isn’t truly a California grape, it’s certainly our heritage grape. This was the most popular wine variety in California in the late 1800s up until prohibition. Thank heavens for the industrious home winemakers and bootleggers during those thirteen years. Without them, most of the Zin would have been planted over to prunes or walnuts and we wouldn’t be able to enjoy all the wonderful old-vine Zins we take for granted today. And, thanks go to the White Zinfandel producers beginning in the 1970s, too. Same story. Without White Zin, most of those old vines would have been bulldozed decades ago, when red Zin fell out of favor. Today, Zinfandel is #4 on the list of top varieties planted in California, behind Merlot (#3), Cabernet (#2) and Chardonnay.

TIP! When you buy a California “field blend” Zinfandel is usually a major player, if not the lead player.

END_OF_DOCUMENT_TOKEN_TO_BE_REPLACED

Zippy Zins at the ZAP Festival!

I love Zinfandel. Sometimes I get into a space where nothing else will do. In spite of all the complaints about its being high octane and sometimes sweet, I just love that bright mouthful of berries.

I just check the alcohol before I buy and avoid those brands that have been boozy or sweet in the past. We’ll take a good look at Zin before the ZAP festival, which starts on the 31st and goes through February 2nd.

ZAP, by the way, is short for “Zinfandel Advocates and Producers” and this annual tasting is what many people look forward to as the greatest tasting event of the year. If you live in the Bay Area or plan to be in the area at the end of the month the ZAP festival can be a wonderful, if somewhat dangerous, diversion and a chance to try some really fine Zins you haven’t tasted before.

Dangerous, because more of us will go to the Grand Tasting, on Saturday the 2nd, than any other event and there are a bazillion wineries represented there. It takes some serious self control to prevent it from morphing into a Zin blowout that results in equally serious cotton mouth and monster headache later on.    END_OF_DOCUMENT_TOKEN_TO_BE_REPLACED 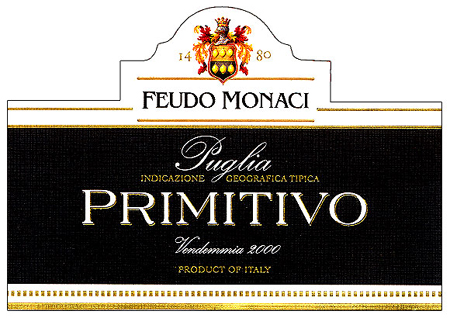 My brother-in-law was at the grocery store picking up some things for dinner and called to ask whether he should buy the Old Vine Zinfandel or the Primitivo – same brand. My answer was that if the price is the same, flip a coin, because Primitivo is another name for Zinfandel.

In 2002, DNA fingerprinting revealed that Zinfandel’s origins are in Croatia, of all places. They traced it back to a rare variety known as Crljenak Kaštelanski – try to pronounce that one after a few glasses of Zinfandel – or even before 😉

From Croatia it traveled to southern Italy, where they call it Primitivo. Most of it is found in Puglia, the heel of the boot. It also made its way to the east coast of the US as a table grape (for eating) and, eventually, to California where it became a wildly popular wine grape. It was the most planted variety in California prior to prohibition and it’s #3 today.

TRIVIA! In California we used many, many different names used for it – Black St. Peters, Zinfendal, Zeinfandall, Zenfenthal – before settling on Zinfandel. END_OF_DOCUMENT_TOKEN_TO_BE_REPLACED

Well, the ZAP Grand Tasting may be a deliriously happy, fuzzy memory by now, but the website carries on! Here are some really great recipes to pair with your favorite Zin, courtesy of ZAP (gotta have those Tortellini Porcine)! Cheers!

Send me your wine question

Speaking of Zinfandel, I hope to see y’all at the ZAP Grand Tasting this Saturday, the 29th! ZAP is short for “Zinfandel Advocates and Producers” and this annual tasting is what many people look forward to as the greatest tasing event of the year! The President of ZAP told me that Primitivo and Zin-based field blends will be allowed this year! Yum! BE THERE!

Send me your wine question and I’ll get back to you in a jiffy!