Are the Grapes Harvested Mechanically?

Since I wrote about the beginning of harvest, some of you have asked if the grapes are picked by hand or machine. The short answer is yes:

Harvest started early and with a bang, on August 1st, and then slowed down dramatically with unseasonably cool weather in the early part of the month. It’s probably a good thing – it will give the grapes more “hangtime,” which translates into richer, riper flavors.

How do you feel about mechanical harvesting?

Send me your wine question.  I’ll get back to you in a jiffy!

As we see the grapes turning from green to purple, how about a little grape trivia?

Send me your wine question.  I’ll get back to you in a jiffy!

With all due modesty, dontcha just love this photo? When I saw this vine displayed it confirmed something I’ve felt for nearly my whole life: that dormant vines are beautiful – they’re Mother Nature’s sculptures!

And, as an educator I love the graphic depiction of how virtually all wine grapes, world-wide, are grown.

As of the 1860s, vitis vinifera (European grape varieties – wine varieties) have to be grafted to American rootstock in order to survive. Yes, even in Europe.

Long story, short: Back in the 1800s, as French varieties came to the U.S. American varieties went to France. Some of the American cuttings that went to France carried a nasty pest, phylloxera, with them. END_OF_DOCUMENT_TOKEN_TO_BE_REPLACED

Bud Break in the Vineyards

What is bud break? Every spring the tiny buds (growing points) on the vines begin to swell up and  tiny bits of pinky-green new growth break through –  bud break!

I’ve already seen some new growth on some of the early varieties like Pinot Noir and Sauvignon Blanc but the Cabernet vines I’ve seen are still sleeping in. This is a beautiful time of year, here. What’s your favorite time of year to visit wine country?

My husband is getting much better. We hope he’ll be moved to a skilled nursing facility this week, to regain his strength. Thank you so much for the kind messages and emails.

Send me your wine question    I’ll get back to you in a jiffy!

Hi! This is another golden-oldie post, but very timely. Growers who haven’t finished up their pruning need to shake a leg because the 2013 growing season is starting as we speak!

For those following my personal story, my husband has been transferred from the ICU to another floor in the hospital, which is a good sign. Thank you for the very nice emails and good wishes!

‘Tis the season. Now’s the time to get the vines pruned before they think about pushing out new growth. Pruning can be done any time during dormancy, which is usually from sometime in November unitl about mid March here.

Pruning is extremely important to yields and quality. It’s the biggest single tool the vineyard manager has to influence how many shoots will emerge in the coming weeks and approximately how many grape clusters will form.

Its not hard. There’s actually sort of a mathematical formula for it. The grower has fairly specific numbers in mind for shoots and cluster based upon the variety, the spacing, the vigor or the situation, and his/her experience with the site. He instructs the pruners accordingly.

The skeletal picture above tells you that, from all that lush green growth of summer, after the leaves drop in November and the bare shoots are exposed, almost nothing is left behind after pruning.

The picture shows two common ways (among nearly countless ways) to train a grapevine. Let’s go with the top figure. See those little bumps on the horizontal “canes” or shoots? Those are buds, or growing points. When the vine wakes up, each bud is expected to push out a new shoot. And each shoot will produce two clusters, give or take. We know, from experience, that the clusters will emerge from the new shoots, but very close to the old shoot. Those two horizontal  canes were new growth the previous spring, so the clusters will hang just below the trellis wires.

As many a vineyard manager has reflected, the vines haven’t read the textbook so a bud may push out more than one shoot and a shoot may produce more or less than two clusters. There’s nothing to be done about less, of course, but if there are more shoots than anticipated they’re thinned out in April. Too many shoots cause overcroppping and crowding – which exacerbates mildew problems.

Later, after the vines flower, since too many clusters may lead to diluted flavors, any excess is cut off. So, at least among top-quality producers, the leaf canopy and the clusters will be monitored from the beginning until nearly the end of the growing season in an effort to make the season go smoothly and promote flavor intensity.

Easy for me to say “It’s not hard.” Better to ask the pruner who won this year’s annual pruning competition! He walked away with $600.00 in cash plus a bunch of other goodies. Way to go!

And, from those bare “bones” a lush, green canopy will emerge again. Soon!

Send me your wine question   I’ll get back to you in a jiffy!

Susan wrote in because she was in Napa Valley last weekend and wondered if we plant all the pretty yellow flowers she saw everywhere, and if they serve a purpose.

The mustard season is fleeting! They’re predicting another beautiful weekend here in the Napa Valley, so come on down and take in the view! Cheers!

Send me your wine question    I’ll get back to you in a jiffy!

Jerry wrote in to ask one of the most controversial questions of all: What is terroir? It’s a tricky question because different folks apply different meanings and some think it doesn’t exist at all! This short video will fill you in:

I know I’m going to get some push-back on this business of the soil not flavoring the wine directly, so let me go to a higher authority: Dr. Mark Matthews, Professor & Plant Physiologist for the Department of Viticulture and Enology at University of California at Davis (California’s best-known wine school.) END_OF_DOCUMENT_TOKEN_TO_BE_REPLACED

How Long do the Vines Last?

Question from Josh: We were in Napa Valley last weekend and noticed more than one vineyard that had been cleared. The stumps were piled up. How long do the vines last?

Reply: ‘Tis the season. The grower takes the last crop and rips out the vineyard. I remember sitting by a vineyard with some friends about this time last year when all of a sudden this huge bulldozer showed up and ruthlessly mowed down what looked like perfectly healthy vines. I’ve seen it before but my friends were mortified.

There’s no simple answer to your question. Virtually every vineyard that’s knocked down is still alive and producing a crop. The vines can live a remarkably long time. You’ll see some very gnarly, tortured looking old vines that predate prohibition in the Sierra foothills and in Sonoma. Here in Napa Valley they’re out there, too, but it’s more of a hunt.

Common practice in old vineyards is to replace individual vines with new ones as they die off. In that case there’s no absolute age for the vineyard. You think of it in terms of average age.

What I can say is that the economic life of a vineyard is often somewhere in the thirties. When the vines are in their twenties they become less vigorous and the crop yield often has to be scaled back. It could be because they have some kind of virus. Or it could be because they’re simply getting old. At some point a decision has to be made. END_OF_DOCUMENT_TOKEN_TO_BE_REPLACED 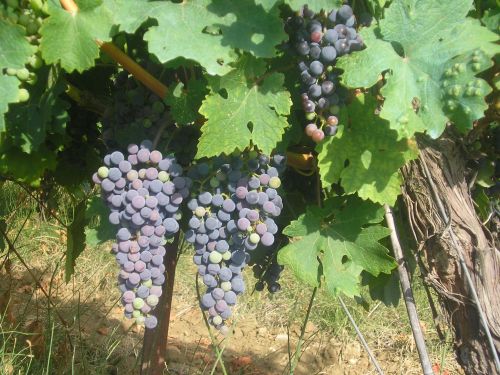 Aren’t the purty? There’s something so sweet and lovely about the clusters as they begin to blush and change color. By the time they’re finished they’ll be almost black in color.

And, the color change is such a significant event that there’s a name for it – French, of course 😉 – veraison.
Veraison signals that the shoots have stopped growing and that the vine’s energy has shifted into fruit ripening. It’s a kind of code language to the vineyard manager and the cellar master to get it together for crush because the grapes will be pounding on the door before long.
Veraison is usually complete within about ten days, if the weather’s good. Shortly after, the vineyard manager will get a baseline sugar reading. Folks who are called field samplers are hired to walk the vine rows, collecting grape samples. Because most vineyards are harvested only once, they get specific instructions from the vineyard manager because the sample needs to represent the section of vineyard as a whole. The winemaker wants an average reading of sugar, acid and pH. END_OF_DOCUMENT_TOKEN_TO_BE_REPLACED 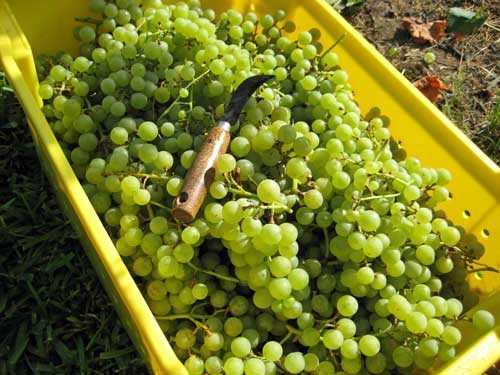 Last time I waxed eloquent about our lovely morning fog here in Napa Valley. Of course, we haven’t had any since then…

Anyway, I thought it might be a good time to take a closer look at how climate influences your enjoyment. That’s what it’s all about, right?

As we said before, world wide, the best winegrowing regions tend to have Mediterranean climates and the growers in each region want the same thing: enough sun and heat to bring the grapes to complete ripeness, but not so much that they lose too much acidity along the way. And, each region has its challenges.

If you like to garden, you know how seasonal temperatures affect the ripening pattern of your fruit and vegetables. Imagine trying to ripen tomatoes on your patio if you live San Francisco, where it’s foggy daily in the summertime, and temperatures rarely rise above 65F.  Those are going to be some tart, green tomatoes, right?  The same thing applies to grapes. They start out with high levels of acid, low levels of sugar, and relatively vegetative flavors. As the weeks go by they gain fruitiness and sweetness, and the acid decreases, provided they get enough heat and sun. So, depending upon where they’re grown they’ll ripen slowly or quickly and end up tasting more or less ripe since the level of sugar and acidity is affected.
END_OF_DOCUMENT_TOKEN_TO_BE_REPLACED

The Tasting Group
Create a free website or blog at WordPress.com.