At a tasting the other day, when the host referred to Malbec as a Bordeaux variety the guy sitting  next to me said “I thought Malbec is from Argentina.” And, well you might think, since Argentina has truly made this grape their own. Here’s the story in brief:

What’s your favorite Malbec? Got any great values for us to try? C’mon! Let us know!

Send me your wine question  I’ll get back to you in a jiffy!

Grape of the Week: Malbec 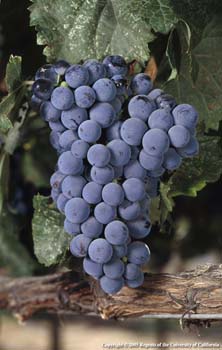 We’re almost finished with Bordeaux varieties! We’ll move on in a couple of weeks.

I know what you’re thinking: “Isn’t Malbec from Argentina?” You’d certainly think so, these days, because Argentina grows more Malbec than anywhere else in the world. But, it probably came over from southwestern France in the mid 19th century. We don’t know how far back it goes in France, but it’s been known in southwestern France, including Bordeaux, since at least the 18th century.

Roots
We call it a Bordeaux variety because it’s been a traditional part of their red blends for a few hundred years. As it explodes in Argentina, it’s gradually disappearing in Bordeaux, mainly because of it’s tendency to “shatter” – not pollinate well – there. Here in Napa Valley, it’s still considered a player in putting together a Meritage or Bordeaux-style blend.

The real French home for Malbec, today, is Cahors, in the southwest. This is a very ancient winegrowing region but they’ve never been very good at PR. They’re working hard to turn that around and it won’t be long before you hear more and more about “The Black Wine of Cahors.”

TRIVIA! In Cahors this grape has multiple names: Auxerrois, Cot and – Malbec.

What to expect
It’s so popular, you tell me! You sure get a good bang for you buck, don’t you? It’s a very flavorful grape. The “black” reference is appropriate because it’s thick-skinned, with tons of pigment and a healthy dose of tannin too.

When I think of Malbec I think big aromatics and bigger flavors. And, it’s black and not only in terms of color. The aroma and flavor make me think of black berries, black currant, black plums… Of course, it depends upon where it’s grown. Maybe some licorice or tobacco tossed in there.  Most Argentinian Malbec is made in a “new-world style,” which means generously oaked so you can add vanilla, spice and toasty character to the description. END_OF_DOCUMENT_TOKEN_TO_BE_REPLACED

Q & A: I Thought Malbec is from Argentina

Question from Bob: Hi! I'm confused. I thought Malbec is from Argentina but you said it's a Bordeaux variety. What's the story?

Hi, Bob! Thanks for writing. When you look at the shelves of your local wine shop, it's completely understandable that you'd think Malbec is from Argentina, but it was imported to Argentina from France in the mid 1800s. And, then, it' wasn't until the mid 1990s that it really took off as the "it" wine from Argentina.
Its origins are uncertain, but we know it's been in Southwest France since at least the 1700s and was the most widely-planted variety there until the 1950s. If you've ever had a bottle of the rustic Cahors (where it's called Cot) from southern France, it's at least 70% Malbec. There's also a small amount grown in the Loire Valley, where it's called Cot or Auxerrois.
In Bordeaux it was used to give the wine weight and color, but the plantings have greatly declined over the past several decades mainly because it's difficult to get it ripe in that relatively cool climate.
Virtually all wine grapes, worldwide, are of European origin and are members of the species Vitus Vinifera. And, Vinifera came to Europe via Georgia and Armenia. Wine is also made of native American varieties, but it has a tiny market niche. We seems to prefer these old-fashioned varieties that have been used for centuries.
But, no one would argue with you that when it comes to Malbec, Argentina is the immediate association. In fact, any number of producers in Cahors are known to be copying the "new world" style of Argentinean Malbec and ramping up marketing trying to get a piece of the Malbec action!
Hope that helps. Cheers! Nancy
Send me your wine question
Subscribe    To subscribe by email go to home page, right column